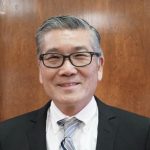 Michael Matsuda is a nationally recognized 21st century educational leader known for innovation, entrepreneurship, and building creative collaborations with private, public, and non-profit sectors, which have extended and transformed educational opportunities for students. In just three years as superintendent of the Anaheim Union High School District, he was honored as one of the twelve national “Leaders to Learn From” award from Education Week Magazine, the “Visionary Education Leadership Award” from Cal State University Fullerton, and the California Association for Bilingual Education (CABE) 2017 Administrator of the Year award.

As an innovator, Mr. Matsuda has developed the AIME (Anaheim Innovative Mentoring Experience) program that has developed mentorships for over 1,300 high school students and has created over 100 annual summer paid internship experiences for students who also receive college credit through Fullerton College. Additionally, he created the “Sustainability Showcase” with Cal State University Fullerton, a “Ted Talk” like event for students promoting environmental advocacy, which recently won a state “Golden Bell” award. He also developed the Student Service Foundation, a foundation led by students who evaluate and award student service grants. In addition, he has conceptualized and launched the Servathon, a massive student service day involving over 4,000 students, families, and adult mentors that promotes kindness and compassion.

Before assuming the role of superintendent in March 2014, Mr. Matsuda spent 22 years as an educator in the Anaheim Union High School District. He began teaching at Orangeview Junior High School, where he was twice selected as Teacher of the Year. He also taught honors English classes at Oxford Academy.

Mr. Matsuda went on to design and manage the Beginning Teacher Support and Assessment Program for nearly a decade, before moving into a District administrative role, overseeing professional development opportunities for 1,300 teachers and administrators. He moved into district leadership as a coordinator in charge of professional development and grants, bringing in over 23 million dollars from various sources during the height of the recession.

In addition to his District responsibilities, Mr. Matsuda served nine years as a trustee on the board of the North Orange County Community College District. He was co-chair of P21 California, a statewide coalition of organizations supporting 21st century skills and content for public education. He led the AUHSD Common Core Task Force in its efforts to develop a transformational, 21st Century teaching and learning implementation plan, and was a founding member of the Closing the Orange County Latino Achievement Gap initiative.

Additionally, Mr. Matsuda has advised the State Board of Education on English learner policy; analyzed and recommended textbooks and curriculum frameworks for adoption by the California State Board of Education; co-wrote the Mendez v. Westminster civil-rights curriculum used by school districts statewide; and served four years as president of Californians Together, a statewide English Learner advocacy network. He also developed partnership grants valued at over $27 million with Cal State Fullerton, UCI, The National Science Foundation, West Ed, and the Orange County Department of Education.

Mr. Matsuda received his bachelor’s degree in English from UCLA and a master’s degree in public administration from USC. He received his teaching credential from Chapman University and his administrator credential from CSUF. He has been a lecturer in the teacher preparation programs at Cal State Fullerton and Chapman University. Mr. Matsuda also is actively involved with numerous community organizations such as Los Amigos of Orange County, and the Orange County Asian and Pacific Islander Community Alliance.

In 2017, Mr. Matsuda received an honorary “Doctor of the University” from Chapman University.